The Windows app store is an online marketplace where developers can publish apps, opening up a whole new market of desktop PC users as your audience.

The Windows app store is important as it's the first OS that provides directly for building native desktop and device apps using web technologies.

And the numbers speak for themselves - 1.5 billion people globally are windows legacy users, many of whom are expected to move to the next improved Windows versions.

This will open up a huge customer base. A significant part of this will include business, education and enterprise users, who may be your target customers. 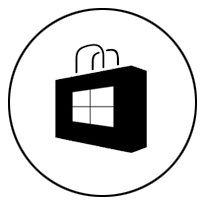